GameSound.org was established in 2005 with the aim of making that which has been written on the subject of interactive sound in games easily accessible, and to be a useful resource for those who work in, aspire to work in, or wish to learn more about game sound.

The articles section ties the many disparate threads of game sound on the net together in one convenient spot, the books section lists those few published texts which cover the topic, the jobs section displays some of the gigs that are to be had at the moment, and the links section is a great resource for those wishing to further explore interactive audio within the games industry. 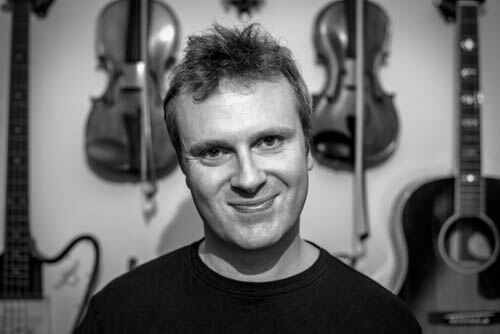 Kenny is best known for his work as Head of Audio at game developer Media Molecule where he was responsible for manifesting the critically acclaimed audio experiences in their LittleBigPlanet and Tearaway franchises. Kenny left Media Molecule in 2015 to pursue a freelance career, with his friends at Media Molecule as his first client.

Before joining Media Molecule Kenny worked as a sound designer in the busy centralised audio department of Sony’s London Studio where he worked on a wide variety of projects, from action-adventure titles such as The Geataway: Black Monday, 24: The Game and Heavenly Sword, to more family-friendly offerings such as the EyeToy augmented reality series.

As a freelancer, Kenny has worked on Tearaway Unfolded (2015) for Media Molecule, Tethered (2016) for Secret Sorcery, WonderWorlds (2017) for Glowmade, Astro Bot Rescue Mission (2018) for Sony Japan Studio, Knights and Bikes (2019) for Foam Sword Games and, most recently, Astro’s Playroom (2020) for Sony Japan Studio which comes pre-installed on every PlayStation 5 console.

He has a BMus in Music Technology from the University of Edinburgh and an MA (with distinction) in Sound Design from Bournemouth University, and lives in central Scotland with his family.

You can find out more about Kenny’s work via his professional websites AudBod.com and KennyYoung.com, and follow him on Twitter @kcmyoung.